The competition was all about finding out a solution for a social issue which is prevailing in Karnataka. The solution was to be presented in the form of a video project. The video project once uploaded in the portal of fourthambit, a voting slot was open for a short period. Students were asked to share their videos and get likes online. Based on the number of likes received on the portal, the top 10 videos were shortlisted for the final round.

The video titled, “Grey Water Management”, by the students of Kristu Jayanti College went viral online and claimed the second spot in the round one with more than 1800 likes and qualified for the finals. There were around 49 teams who had uploaded their video projects. A jury of judge scrutinized the top 10 video projects and the winner was announced. Finally, students of Kristu Jayanti College won the first prize and received a citation and 1 lakh cash prize. The relevance of the issue and the practicality of the solution helped the team to secure the first position. 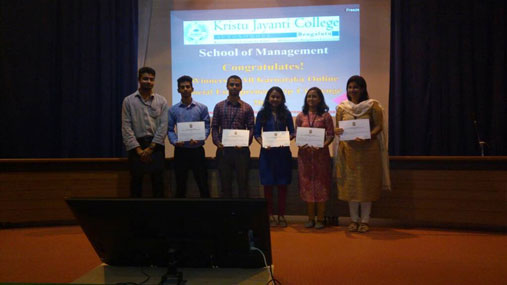 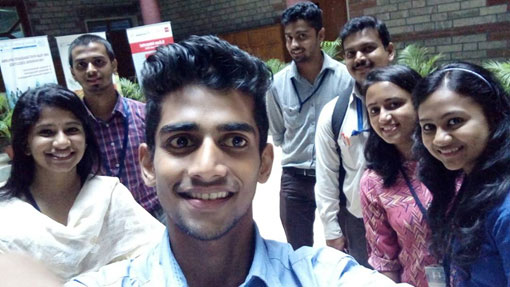 On the 10th of October, three students, Jeffery J, Jithu, and Demetrius Jacob, from the Kristu Jayanti School of Management, represented the institute in a National Level Business Plan Competition hosted by St. Aloysius Institute of Management and Technology, Mangalore. In a grueling competitive environment where there were over 20 shortlisted participants from across the nation, our proud Jayantians bagged the first place to add to yet another accolade.

The competition consisted of three rounds, wherein the students were asked to present a unique and original business plan from scratch. The competition was adjudicated by brilliant minds from the industry with years of experience. Our students presented a plan that would cater to a smooth flow of communication from an individual who is vocally impaired to a regular individual.

The winners were awarded with 10,000/- Rupees cash prize along with a trophy.

Runner Up of NIPM Quiz

Runner Up of National Level NIPM Quiz 2018
Mr. Alex M Saji and Ms. Sanya Joseph of MBA/PGDM batch 2017-19 of Kristu Jayanti School of Management won the runner up award at the NIPM Quiz 2018. National Institute of Personnel management conducted quiz competition for B-School students at its various chapters at the state, regional and national level. Students of the Kristu Jayanti School of Management won at the state level NIPM quiz 2018 at Bangalore and qualified for the Regional level Quiz. 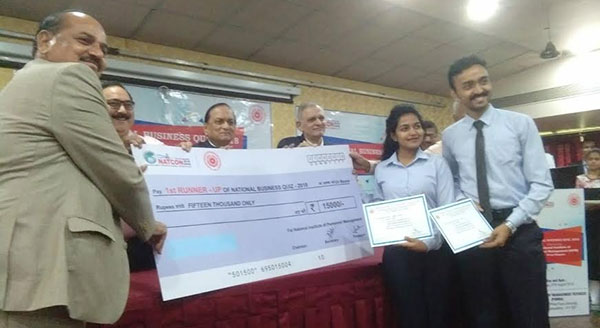